This Februar exhibition is sponsored in parts by

The art exhibition “Donas Paralelas” opens with an exciting reception on

Urban Cultural Arts Foundation (UCAF) presents this twelve-week exhibition and invited Alanná G. Rex and Felicia Dunson, both Columbus born emerging artists. Every precaution will be taken to ensure the safety of our guests and staff. A mask will be required of anyone entering the gallery.

Alanna G. Rex is a scholar, lover of life, performer and honoree of the Social Change and Community Philanthropists Award. She is dedicated to the rights of women and girls and to raising awareness and creating solutions to address social injustice. This multi-talented former model and artist of color in white-dominated space explores the literary Dark Lady and the visibility of the marginal in cultural storytelling.

Felicia Dunson also a brilliant artist on the rise, is a member of the “Creative Women of Color” and has been working with GCAC on current events and art exhibitions in the central Ohio area. She is an art instructor and a formally trained fine artist with a passion for fashion and an urban arts background. She also goes by the name FDZgraffiti (www.fdzgraffiti.com).

Curator of this exhibition is Chief Baba Shongo Obadina who is excited about this special show featuring two native Columbus` artitst both emerging and with their special own style. “The Gallery in the hood has an over 40 years history and so many of our very good artists left their foot prints here… it is important always to give also the emerging artists their room and their audience… here we are: two wonderful ladies, artists on a strong and creative way. I am happy to have them here. Come and check it out.”

Here are some pics of the very good Opening Reception and a big thank you to our great photographer Jamia Shepherd – Contact: [email protected].

and also a big THANK YOU to GCAC: Baba Shongo got an artist grant for the PATAKIS!

David Merwin will add his atmospheric compositions to the opening to enhance our gallery experience. David is a guitarist who served as the former Secretary and now as President of The Guitar Club at The Ohio State University.  KEN OBASI LESLIE will play the trumpet… Ken is a wonderful artist who had his last show at the WHT Art Gallery in February 2018. He also is a famous musician and part of the legendary group The Last Boppers. Baba Jubal Harris will present and play a water drum, Joann Nagel will bring her singing balls out of Christa and metall as well as a gong… they will accompany us to be in, with, around, through and by water… our element of life

The goal of Sabine Lampe, Artist and Guest – Curator of this show is, to bring together this multidisciplinary artistic mixture… WATER with all senses … visual expression, spoken words, sound, music, food – same topic: WATER is Life.

Let us present some of the artists 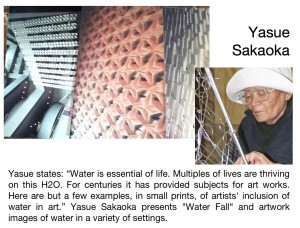 was proud to present

The Art of Forrest “4est” A. Beatty

The show was a unique series of mixed media work created on prison bedsheets presenting both figurative and abstract graphic storytelling. “4est” (1946- 2005) is from Worthington, Ohio and graduated from Linden McKinley High school and also studied at the Columbus Collage of Art and Design.

Urban Cultural Arts Foundation (UCAF) presented “The Art of the Cultural Wall” in conjunction with Black History Month. The opening reception and artist talk occured on

Chief Shongo Obadina, curator of the art show „Art of the Cultural Wall“ was glad to announce this exhibition featuring internationally known artists Larry Winston Collins and Kojo Kamau. Collins and Kamau   presented selected pieces from the “Cultural Wall” Project located on the Long Street Bridge in Columbus Ohio. Collins and Kamau designed the mural after the two artists were selected to collaborate on the project in 2012. The bridge over interstate 71 links the downtown Discovery District with the Near East Side of Columbus known as the King- Lincoln District.

Larry Winston Collins – multi media artist from Cincinnati, Ohio and a graduate of CCAD, lived and worked in the Columbus Near East Side for many years. Kojo Kamau – photographer and a native of Columbus, was born and raised on the Near East Side. Kojo has documented the people and places in Columbus for most of his life. Both Larry and Kojo have had a long time relationship with the William H. Thomas Art Gallery.

WHEN MY SOUL SPEAKS

belief that when artists communicate through their art with whatever mediums they may use they are speaking from their souls. One of the most challenging concepts an emerging artist faces is accepting their own unique voice. Another difficulty is to refrain from comparing their work to others and the self assurance to create their own ‘soul song’. I challenged each presenting artists to, through their own expression, show how ‘soul communication’ works for them. The results are truly amazing.”

Entertainment was provided by

AS I SEE IT – Columbus’ Black Achievers Plus..

Curator Chief Baba Shongo Obadina is prepared a great show. He stated: ” I am happy to welcome and feature Roger Williams at our gallery in the African Village of Columbus Ohio. This area of the city is also Roger’s home where he lives and works.”

Roger Williams showed his collection of portraits  “AS I SEE IT – Columbus’ Black Achievers Plus..” and stated about this show:  “I have done poraits over the years and have worked for Andy Warhol. I lived in the back of his studio in New York in the 80th.  I became interested in Andy’s portraits. I call it court painting of famous people in a pop art style. I returned to Columbus in 1990 and wanted to do portraits again, but not in a pop art style. I decided to do a series of portraits called “The Deconstructed Image”: Pop Art under the umbrella of postmodern art was deconstructed. DE constructivist art is irreverent. It overlaps layering and transparencies in an articulated style of drawing with 360 degree directions and energy. In Columbus I picked famous artists and politicians to paint i.e. Elijah Pierce, Mike Coleman, Aminah Robinson, Emerson Burkhart plus Barack Obama selfies and others on a larger scale in an architectural tool-style drawing plus color.  I think DE constructivist, Hip Hop, new pop, pop surreal, gothic, mundane fairyland, and conceptual are art systems that more define this decade.”

Guest curator was well known artist Ken Obasi Leslie. He is native of Cincinnati, attended the Philander Smith College in Little Rock as an Art History Major and exhibited in various venues around the country. Leslie is one of the founding members of the “Neoancestralist Movement” and he states about the upcoming mix media show: “Blended Universe” is a group exhibition focusing on the cosmos and how we are related. We are the way that the universe sees itself. The art deals with a unified existence of which I have coined “Astromythological Cosmology”, the study of our ancestral past and cosmic future through the present expression of spirit”.

IMAGES FROM THE HOUSE OF OBA

Click here to watch Shongo’s message for the ‘Images of the House of Oba’ Show:      http://youtu.be/pi4vCf3l9wo

Images from the House of OBA

This show attests to the enduring strength and depth of the African-American artist community in Columbus. These works have the power to challenge us and to move us.

The profoundly disturbing paintings by Roman Johnson on hunger still haunt us today as issues of hunger persist, calling for a response.

The whimsical sculptural figures of Antoinette Savage and the graphic elegance of Aminah Robinson’s prints and drawings examine themes of memory and spirit.

The mixed media paintings of Ed Colston and the Afrocentric imagery of Pheoris West celebrate painting and the right to state universal messages. Sabine Lampe’s felt hangings call us to think about our environment and appreciate our natural world.

This work is diverse and bold. The collection grows out of my 30-year involvement in Columbus’ African-American community, through personal friendships with artists and through the programming of the William H. Thomas Gallery located in the African Village of Columbus, Ohio.   Curator: Chief Shongo Obadina

Exhibition at the WHT Art Gallery in August, September and October 2013

“Images From The Homeland”

An exhibition was on display of African artifacts belonging to Columbus native and resident, Keith Neal. Neal has been a long time collector and presented his impressive collection of African traditional arts that reveal the outstanding achievements of black multimedia artists from different communities and ethnicities.

On display were objects and materials that are hundreds of years old. “In age, variety and beauty, out of Africa is second to none,” said Neal. “Sometimes before we can experience the impact and beauty of African art we have to understand how our minds have been conditioned by Western cultural values. In a way we have to undergo an aesthetic brainwash. In other words, we have to step back and be able to appreciate this art on its own terms.”

This collection, a true labor of love that grew from a hobby, was selected over an eighteen year period. Compared to traditional art from other parts of the world, the prices for African art are still very reasonable and is often seen by collectors as a very good investment.

Exhibition in May, June and July 2013

In February 2013 we welcomed Antoinette Savage as the featured artist and Queen Brooks as our guest curator “Speakin’ Truth Thru the Ancestors”.

click on the following link and check out the COLUMBUS DISPATCH article from March 3, 2013

from the Benjamin – Marcus Permanent Edition by

The Opening Reception of SMALL WORKS was an exclusive opportunity to meet BENJAMIN CRUMPLER, to enjoy his work and to purchase a signed and colored print of his FACES SERIES in a limited edition. The sales revenue supported the running of the William H. Thomas Art Gallery and helped with financing the upkeep costs of our non-profit organization.

multi media artist is a native of Columbus, born and raised on the near East Side. Curator Chief Shongo Obadina was glad to present this show: it was a homecoming.

Ben exhibited his work in the first big show the William H. Thomas Art Gallery held in 1994, “the Ohio Connection”.

Barbara Chavous featured in May, June and July 2012

Wonderful! Please send us an email to [email protected]